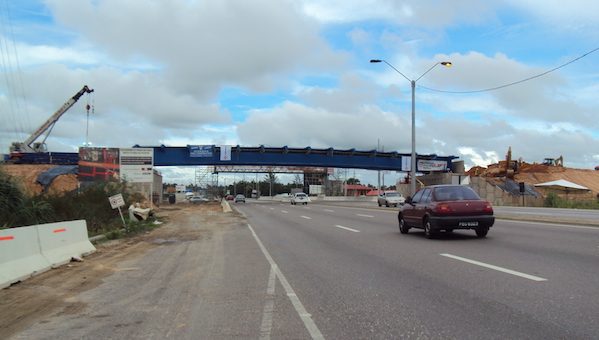 When the World War II commenced, Trinidad became an important strategic point in the war effort. Through the Bases Agreement signed by British PM in September 1940, Sir Winston Churchill and US President Franklin Delano Roosevelt, Britain received 50 old American destroyers, and the US, the right to establish bases in the British Territories. Though the US Army had several bases in the island by 1941, the most important were Chaguaramas, and the Air Base at Wallerfield, called Fort Read. The communicating roads between Fort Read and POS (Port of Spain) near Cumuto were deemed problematic as it consisted solely of the crowded Eastern Main Road which slowed down the large convoys moving between the two bases. Due to this congestion a decision was taken on 1941 to build a military two lane paved road between Fort Read and Morvant Junction of the Eastern Mani road just outside POS. Work then began immediately where the highway bisected rural communities like St. Agustine, El Socorro and Tacarigua. In spite of this many crop farmers had to be moved as bulldozers ploughed for this roadway.

The road opened in 1942 where it was the finest road on the island, being smooth and pothole free from end to end and most importantly reserved exclusively for military traffic, with exceptions being made for top-ranking civil service personnel. The new Roosevelt-Churchill Highway swept across the country from Cumuto to a point near Laventille with the force of a flood rushing into a quiet valley. Cleared and graded but not yet surfaced, its naked earth weaves and interweaves protesting patterns under the wheels of army trucks and construction tractors that cannot wait until the road is finished. The highway was then opened for civilian traffic on October 4th 1949.

To date, the stretch runs for 24 km (15 mi) from Barataria in the west where it joins the Beetham Highway to Wallerfield in the east where it ends in the former US Army base on Fort Read. It also crosses the north-south Uriah Butler Highway (UBH) at Valsayn.